G.Empire GeForce GTX 480 is the first card to really break free of NVIDIA’s reference design. G.Empire, previously known as Little Tiger, has developed a whole new circuit board, earlier mistaken for GTX 485, and equipped the card with a big cooler from ARCTIC.

G.Empire has tailored the PCB for more efficient 8-phase power supply and tantalum capacitors to keep the card stable at high loads and frequencies.

The card has dual PCIe 8-pin power connectors, which means it can fetch up to 375 watt from the power supply and motherboard.

When revising the circuit board design the reference cooler became incompatible, but this was solved by using ARCTIC Cooling’s gigantic Accelero Xtreme Plus cooler. 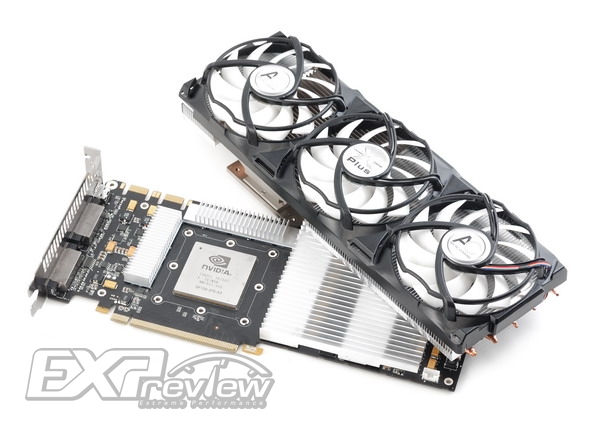 With more efficient power supply, high-quality components and mighty cooling G.Empire decided to raise the frequencies. Quite a lot too, considering the high heat development of the card.

The card is so far only available in limited quantities and has been shipped to sites for reviews, but the Asian manufacturer is serious about its venture and we hope to see G.Empire’s products on the smaller markets too.