Richland, Temash and Kabini - the architecture behind Xbox One and PS4 revealed

Hem Nyheter Richland, Temash and Kabini – the architecture behind Xbox One and PS4...

With Intel’s new generation of processors and chipsets coming the red team is anything but standing still. During a press conference in London AMD is divulging its solutions for notebooks, and NordicHardware is there to get to know the newcomers Temash, Kabini and Richland.

The market has changed and it is time to move on. This was the big message when Sasa Marinkovic, marketing executive for technology at AMD, takes the stand to present the news of AMD’s new generation of mobile APUs. The mobile and ultraportable is taking a bigger slice of the market, something AMD is not going to ignore. 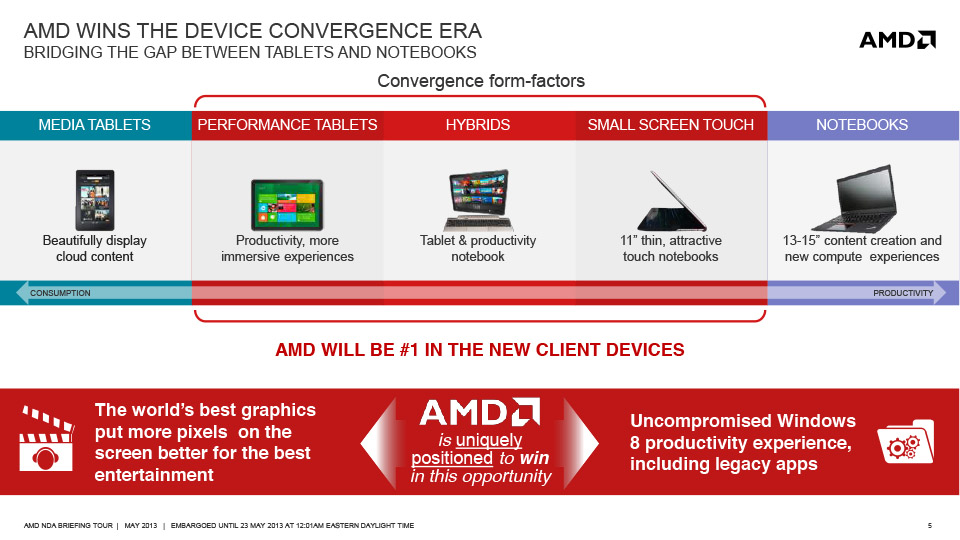 AMD starts by marking the audience it intends to target with the new APUs. The focus is not on high-end gaming laptops, and it is not bare surf and media tablets where ARM is dominating today. Even though such units will be made with these chips, the focus is elsewhere.

Temash, soon in a hybrid near you

First up is Temash, that will come in the A4 and A6 series depending on the price range. Here the focus is on low energy consumption and ultraportability. AMD points out that this is world’s first true X86-based SoC, or system processor, for retail. This is true since the storage controllers have been moved on-die under the same heatspreader. So far three processors have been shown, one branded A6 and two A4, intended to compete with Intel’s Pentium and Celeron processors. 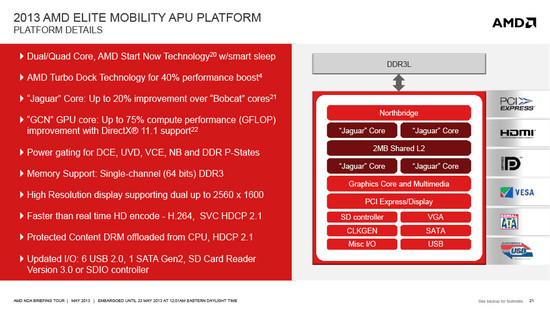 The focus on tablets and small, energy efficient ultraportable laptops and, mainly in the case of A6-1450, hybrids is made even clearer from the specifications. The two A4 processors have two Jaguar cores operating at 1 GHz, which according to AMD will bring up to 20 percent better performance than last generation Bobcat cores. A4-1200 offers only 1 MB L2 cache, graphics in the form of HD 8180 that run at 225 MHz and support DDR3 memory up to 1,066 MHz – with a TDP of mere 3.9 Watt.

The Turbo frequencies that were presented play on the AMD technology called Turbo Dock. Here the focus is more on hybrids, in the form of Windows 8 tablets with docks. The idea is that the docking station will partly prolong the battery life, but also turn up the frequencies on the CPU and GPU for a performance boost up to 40 percent says AMD.

Kabini, one-chip-solution for the mid-range

Next up we have Kabini, and the focus here is shifting from hybrids and tablets to small and ultraportable computers with touchscreens and notebooks in the entry and mid-range segments. Also here we are dealing with a complete system processor with integrated storage controller, and here the branding is A6 for the quad-core models and E1/E2 for the dual-core models. 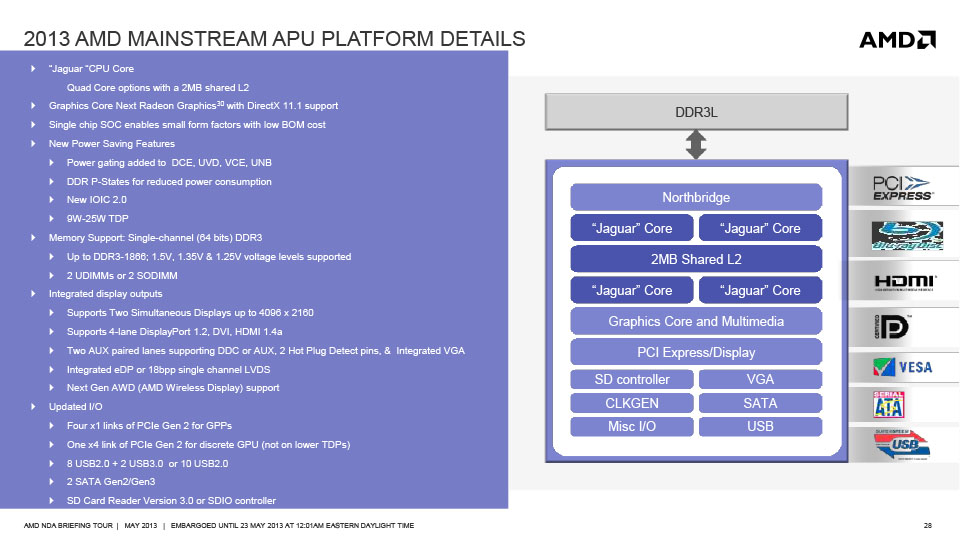 In the same family we find the E series with only two cores. Other than that the trend of slower but similar graphics is similar to the transition between the two A model processors, but with lower clock frequencies overall, less advanced graphics chips and 1 MB L2 cache. With E1-2500 and E1-2100 the memory frequency drops to 1333 MHz, and for hybrids there is no Turbo mode.

Kabini also offers more advanced connectivity than Temash. There is support for HDMI 1.4a and Displayport 1.2 for powering screens up to  4096 x 2160 pixels, and support for two USB 3.0 ports together with eight USB 2.0 ports, or a total of ten USB 2.0.

Jaguar – soon in a video game console near you

Besides a bigger focus on notebooks AMD will get good use of the energy efficient ”Jaguar” core on other markets. Both Sony and Microsoft has chosen to build their next generation video game consoles around it paired with a more powerful dedicated GPU. The circuits used in the game consoles Xbox One and Playstation 4 are unique though since they get a total of 8 cores, by joining two quad-core Jaguar modules in the same package. Together with a unified memory system and a more powerful GPU integrated into the processor it makes Sony’s and Microsoft’s solutions unique from what we will see on the PC market. The base architecture for CPU and GPU are the same, which in the long run will benefit both game developers and AMD.

The next target is ultraportables in the mid-range and the more powerful kind. AMD’s solution for this is called Richland, and is intended to compete with Intel’s i3 and i5 models in the same range. Here we will see a lot more models being presented. 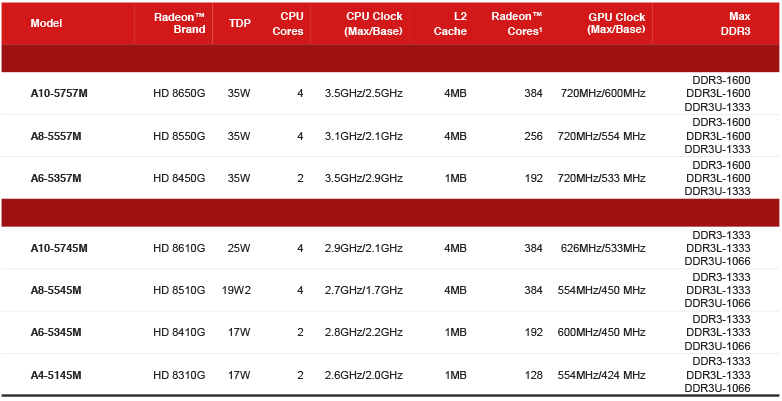 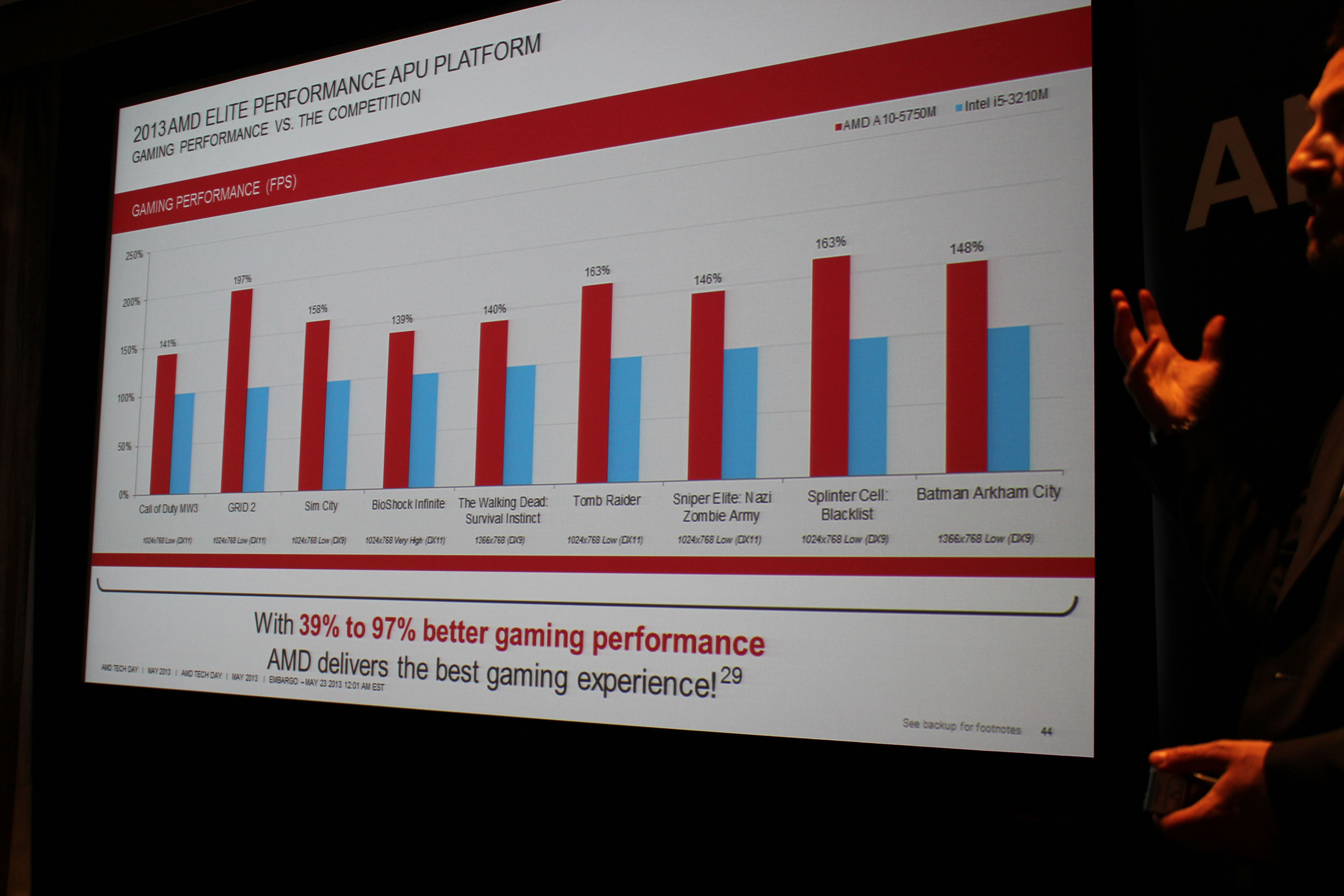 AMd puts a lot of weight of the gaming performance with Richland, and presents a graph with A10-5750M (oddly enough not among the specified models) and Intel i5 3210M, a comparison that AMD claims shows 39% to 97% better performance. Marinkovic points out though that this we are dealing with notebooks, and you should not expect high-detail Crysis 3 performance with an Eyefinity setup from an ultraportable computer just yet.

While going over the new processors AMD took the opportunity to show off some new technologies. One of these is AMD Wireless Display, the red team’s version of Intel’s Widi. The principle is the same, to wirelessly stream to a TV or monitor. AMD wants to put further emphasis on games, and AMD Wireless Display will be optimized for wireless gaming. For comparison the technology will be able of transferring 1080p video at 60 Hz with 41 ms response time, compared to 201 ms with Intel Widi. 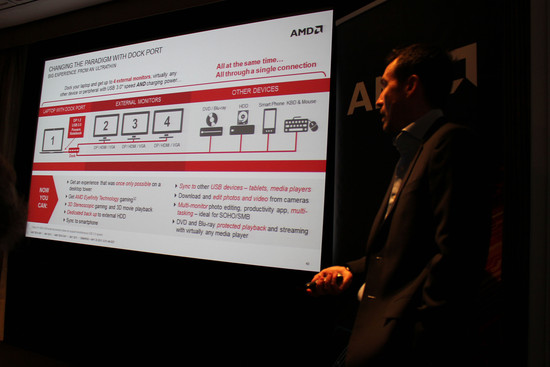 With Dock Port AMD wants to tackle Intel’s Thunderbolt interface. The interface combines Displayport with USB 3.0, and can be used to connect the computer with a single cable to a docking station (that will be available as an accessory from third parties). You can then connect various USB accessories and up to four monitors in Eyefinity to the docking station . There was no information on price or availability.

Another technology that was only touched on the surface is caleld AMD Face Login, and does just what the name implies – logs you in through facial recognition. The idea is to use the webcam to log into the computer, but also other applications and websites.

AMD has also updated the logotypes for the new APUs, with goal of making it easier for consumers to see what the product will deliver, with A10 in the top and A4, E2 and E1 in the lower price ranges.

Products built with AMD’s new APUs are already heading for stores, even if not all models will be implemented immediately. For example, MSI has already presented the notebook GX70, containing AMD A10-5750M and the new graphics chip HD 8970M.

Quite a lot of processors was launched today, and we’re eager to see if Temash, Kabini and Richland has what it takes to compete with Intel’s mobile Haswell processors that should find its way on to the market in the coming months.